March¬ Engineering, the British “racing car-smiths” partnered Jägermeister for five years (from 1974 until 1979). Hans-Joachim Stuck was the outstanding driver. In the Formula 2 March BMW 2 (330 hp in a car weighing 450 kg), he became “King of Hockenheim”, where he alone crossed the line in first place eight times. Stuck was runner-up European Champion in 1974.

He was also successful in the Jägermeister March in the following year (his wins included the Eifel Race on the Nürburgring in 1975 or in Misano in 1976).

Double starts (i.e. two classes on the same day) were not allowed in the Eifel Race on the Nürburgring in 1977. As a BMW works driver, Stuck was compelled to drive in the Group 5 320s in the German Motor Racing Championship, so Jägermeister and March were forced to look for a different driver for the Formula 2 race. They succeeded in engaging Jochen Mass, who drove Formula 1 for McLaren at that time (as James Hunt’s teammate since 1974). Jochen Mass then also won this Formula 2 race in the 1997 Eifelrennen in the Jägermeister March (and Stuck won the DRM race in the Jägermeister BMW on the same day).

Jochen Mass’ March BMW was in the ‘72STAGPOWER squad for the 1977 Eifel Race. This 1977 March-BMW (there were only two works cars that year) was previously owned by the Swiss racing driver and constructor Markus Hotz. 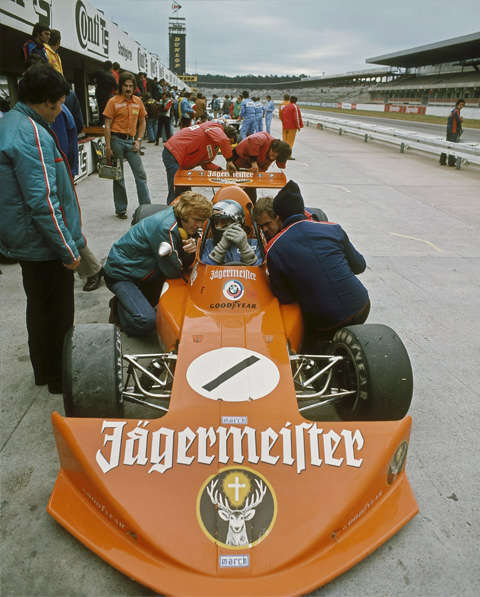