Another of the former Jägermeister drivers paid a repeat visit: Klaus-Joachim (Jochi) Kleint came to ‘72STAGPOWER in Braunschweig to look at the venerable cars of Jägermeister’s racing team. The rally champion from Hamburg (European Champion in 1979) was mightily impressed. And very pleased when he discovered a Kleint RS 2600 constructed by Tost Motorsport in Osnabrück. In earlier days, Walter Röhrl and Jochi Kleint drove out to great successes in just such a Ford Capri belonging to the Kleint team in Hamburg (operated by Jochi’s brother Ernie Kleint). Kleint sat in a Jägermeister Capri in the 1973 Monte Carlo Rally, among other races, and also drove a VW works Golf in orange in the 1975 season, when victories included the Hesse Rally. 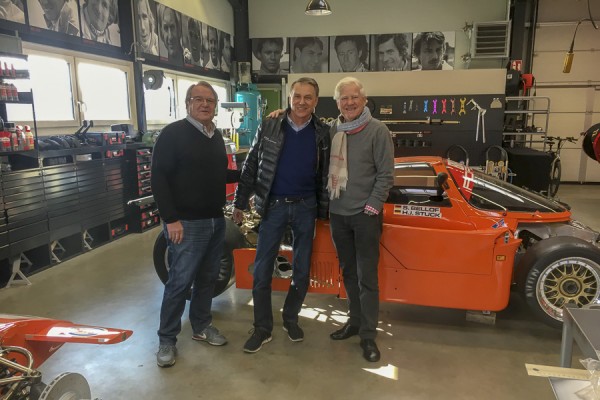 Old companions in the ‘72STAGPOWER workshop. (from left): Ernst-Johann (Bastus) Zauner, Jochi Kleint and Eckhard Schimpf. On the wall in the background (top right) is a photo of a very young Klaus-Joachim Kleint. The portrait, which Jochi Kleint immediately photographed to show to his granddaughter Sofia, came into being four decades ago.